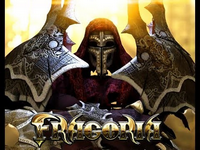 Fragoria takes place within a fantasy environment. The expansive game world is inhabited by many creatures. There are PvE and PvP battles in the game. This allows for multiple variations of combat to happen within the world. At the beginning of the game the player needs to create a character which is then born in Heaven. Each player can create up to four characters on each server, of which there are several.

Characters evolve mainly by completing quests starting from the first level, however they can kill monsters to loot the bodies. The crafting mechanic is an important part of the game; players are able to create useful items, that are sometimes not available except by buying them with a "premium" currency that has a real-life exchange rate known as Emeralds. Abilities of the characters can be improved by purchase of books (with in-game currency) or change of class. Starting from the thirteenth level players can go to varying dungeons of three types.

There are plenty of communication means among players in the game, including in-game posts and chat box, community is created and evolved within guilds and alliances. Game is imitating a real world society with inequality, wealth classes and interactions. Consequently, the game has a dynamic social and economic environment.