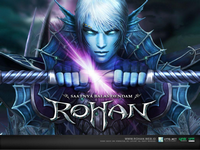 Rohan: Blood Feud is a massively multiplayer online role-playing game that allows players to play with another character within the game world, explore lands, kill monsters, engage in quests, perform magic, adopt a pet, buy a mount, and interact with NPCs and other players. The game includes a player-versus-players system, including a "Vengeance" system.
Players can also participate in in-game groups called "Guilds", which have the opportunity to control areas within the game, dictating rules such as taxes, or battle other guilds.